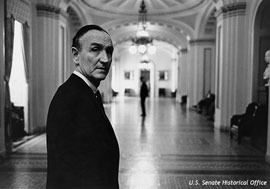 In 1961, Senate Democrats selected their majority whip, Mike Mansfield, to succeed Lyndon Johnson as majority leader. Whereas Johnson had used his considerable “powers of persuasion” to lead the caucus, Mansfield’s style was marked by an immense respect for the equal and individual rights of each senator and for the dignity of the Senate as an institution. “I am neither a circus ring-master, the master of ceremonies of a Senate night club, a tamer of Senate lions, or a wheeler and dealer,” he insisted. “I am what I am and no title, political face-lifter, or image-maker can alter it.”1

Serving as leader until his retirement in 1977, Mansfield remains the Senate’s longest serving party leader. His longevity as leader can be explained, in part, by his willingness to forge compromises to obtain support for legislative proposals. Although Mansfield led a sizable majority of 68 Democrats during the 89th Congress, his caucus was divided between Southern conservatives, Northeastern and Midwestern liberals, and Rocky Mountain moderates. Often, his biggest headaches often came not from Republicans, but from various blocs of his own Democratic party. Mansfield would repeatedly work with his Republican counterpart, Everett Dirksen, the silver-tongued thespian, to build bipartisan coalitions to pass Great Society legislation.

Charlie Ferris, an aide to the majority leader, later recalled, “Mansfield never did anything unless he informed all sides what was going to be done.”2 The tall, laconic former miner (who often cautioned staff to “tap ‘er light,” i.e. proceed with caution) eschewed media attention and did not take credit for the landmark legislation produced during his long tenure. As the person responsible for setting the legislative calendar, however, he deserves much credit for the Senate’s productivity during this period. 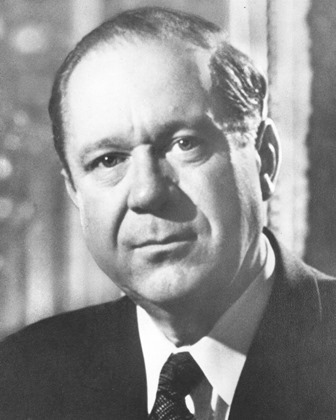 Russell Long, the son of Senator Huey P. Long (D-LA), was elected to the United States Senate in 1948.  At thirty years old, Long was the Senate’s youngest member, and the seat he won was the first and only elected position he ever held.

An effective and pragmatic politician, Long won recognition as a consensus builder during the 1950s.  As a member of the Senate’s conservative Southern block and a rising member of the Senate Committee on Finance, the Louisianan opposed virtually all civil rights legislation that threatened the South’s Jim Crow racial caste system.  However, Long also ardently supported liberal Democratic programs that brought federal projects and aid to Louisiana.  He was one of the few Southerners to vote for the Economic Opportunity Act in 1964, despite fears that it provided too much aid to African Americans.

At the outset of the 89th Congress, Long was elected Assistant Majority Leader, or Majority Whip, by Senate Democrats.  In this role, he rallied support for much of the Democrat’s Great Society legislation.  Long “whipped” enough votes to guide the Elementary and Secondary School Act and the Water Quality Act to passage and to double the funding for anti-poverty programs through amendments to the Economic Opportunity Act.

Long was also a dedicated cold warrior and supporter of the war in Vietnam. When asked about his position as a “hawk,” Long explained, “there is much hard fighting ahead before the dove of peace can find a place to roost, and it is the hawks, not the doves, who will have to do the fighting if freedom is to exist anywhere in southeast Asia.”1  In 1966, as public and congressional criticism of the war grew, Long resigned his seat on the Senate Committee on Foreign Relations in frustration and as a show of support for the President. 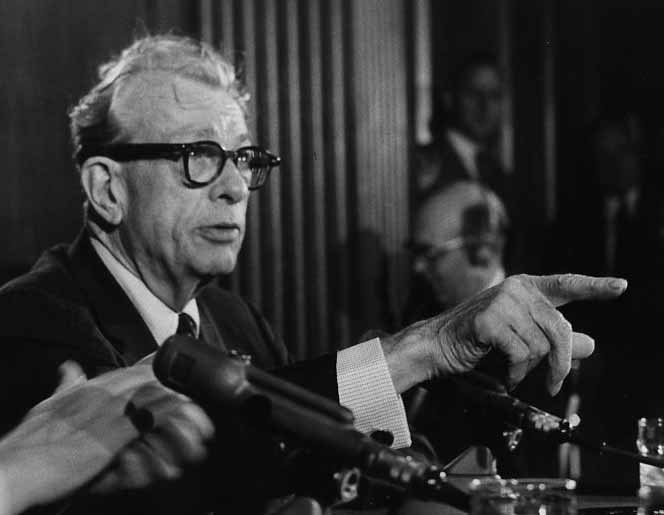 Dirksen brought to his task an attitude increasingly uncommon in today’s politics. “What is the role of a loyal opposition?” he asked in May 1965. “Is it to oppose something that’s right, even though you have a conviction it is right? I do not believe so. If the President is right, we couldn’t for a moment justify a position in opposition without having to confess that we want to use this thing for purely political purposes, forgetting about the well-being of the country.”

Armed with a deep respect for the role of Congress in crafting and passing legislation, Dirksen forged a special relationship with Senate Majority Leader Mansfield—a friendship that paved the way to passing, often in bipartisan fashion, the legislative hallmarks of the Great Society. ”Our working arrangements are excellent,” he told a reporter. “Mike Mansfield is by all odds one of the most agreeable, amiable people to work with …. There has never been a time with a divisive spirit in the Senate that Mike could not come in that door and put all his cards on the table. ‘All right,’ he’ll say, ‘leadership is a two-way street—what do you think we should do?’”

Bound by mutual respect and trust, and putting the nation’s well-being ahead of political advantage, these two leaders, Republican and Democrat, ensured a prominent place for their beloved Senate in the legislative history of the country. 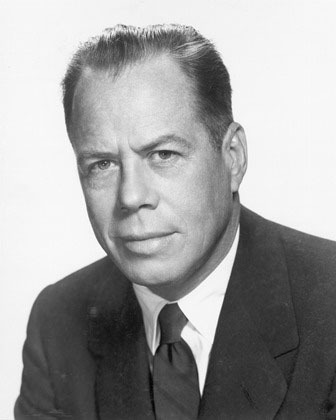 Thomas H. Kuchel (R-CA) was appointed to replace the newly elected Vice President, Richard Nixon, in the U.S. Senate in January 1953.  After retaining his Senate seat a year later, Kuchel was elected Assistant Minority Leader in 1959, a position he held through the 1960s.

A political moderate in the mold of his mentor, Earl Warren, Kuchel advocated “Progressive Republicanism,” which he defined as “conservative in dealing with the people’s money” and “liberal in dealing with human problems.”1  The Californian was an outspoken critic of the Republican party’s rightward shift, and he refused to endorse Barry Goldwater’s 1964 campaign for the presidency and Ronald Reagan’s bid for California Governor in 1966, thus drawing the ire of many within his own party.

Kuchel’s willingness to cross party lines in support of liberal legislation made him a key player in the Senate during the early sixties, as he emerged as the leader of a small faction of “liberal Republicans” whose votes could prove the difference on controversial bills.  In 1964, he served as the co-manager for the Civil Rights Act, which required daily meetings with his Democratic counterpart to share information, schedule speakers, and hand out assignments to the bill’s supporters.

During the 89th Congress, Kuchel co-managed the Voting Rights Act and provided critical support for Medicare and the Social Security Act of 1965.  As a member of the Senate Interior Committee, he also voted for environmental legislation, including the Highway Beautification Act, and backed new consumer protection laws, such as the Federal Cigarette Labeling Act.

Kuchel lost his Senate seat in 1968 when he was defeated in the California Republican primary by conservative candidate Max Rafferty.