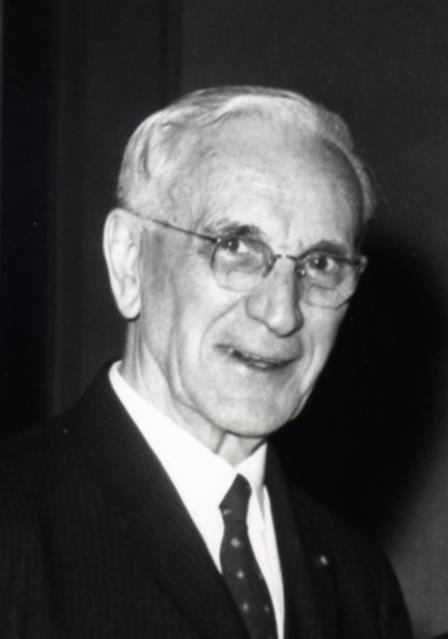 Speaker of the House of Representatives

As a Democratic congressman from South Boston, MA, John W. McCormack favored compromise and resisted political labels.  From 1940-1961, he served as the number two ranking Democrat in the House, behind only his friend and mentor, Sam Rayburn (D-TX).  McCormack’s stout liberal voting record and popularity among conservative and liberal Democrats ensured his unanimous election to Speaker of the House on January 10, 1962, following Rayburn’s passing.

The first Catholic House Speaker, McCormack helped secure the passage of the wave of Democratic legislation that created the Great Society.  In January 1965, he broke with precedent by permitting key rules changes that limited the power that House Committees and committee chairmen had to prevent bills from reaching the floor for a vote.  House Democrats utilized the changes to pass controversial bills such as the Voting Rights Act, which likely would not have made it out of committee had the rules not been amended.

Less than two years later, while speaking at an event with President Lyndon Johnson and Senate Majority Leader Mike Mansfield (D-MT), McCormack set the 89th Congress’ achievements within a Democratic frame of reference, noting “this Nation has never witnessed anything like the fabulous 89th Congress, both sessions of this Congress.  It has surpassed them all.  Not because it has produced more legislation than any previous Congress, but because this legislation will have more meaning and deeper significance for every American than any in the past.”1 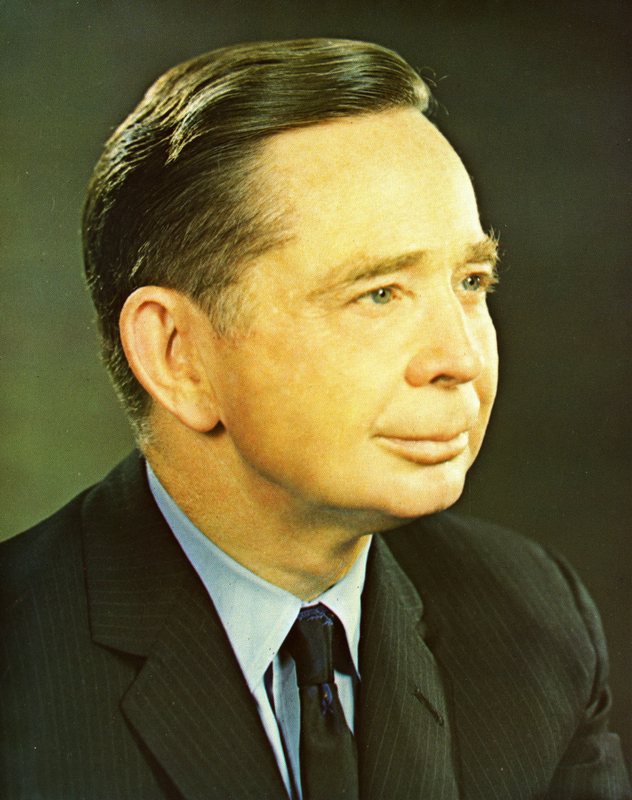 Majority Leader of the House of Representatives

Born in the mining township of Bugtussle, Oklahoma, Carl Albert’s pre-congressional career was filled with accomplishments, from winning national oratory contests and a Rhodes scholarship, to practicing law and earning a Bronze Star as a lieutenant colonel during World War II.

In 1946, he won his first election to Congress. He became known to many as the Little Giant from Little Dixie, representing Oklahoma’s 3rd district from 1947-1977.

As Majority Leader during the 89th Congress, Albert worked closely with then Speaker John McCormack (D-MA) and Majority Whip Hale Boggs (D-LA), to take full advantage of the 38 new Democrats in Congress.

President Lyndon Johnson had a reputation as a persuasive negotiator, but he wasn’t the only political leader of the time that knew how to build support for legislation. In fact, the accomplishments of what Johnson called “the historic and fabulous first session of the 89th Congress” were largely due to the political maneuvering of Carl Albert and the House leadership. According to Albert, President Johnson “recognized that these were house matters. This was our fight, and it was the leadership of the House that won it.”1

Following the 89th Congress, Albert continued to serve in the House leadership, ascending to the highest position of any Oklahoman – Speaker of the House – and found himself a heartbeat from the Presidency on two separate occasions.

After many years of successful legislative work, Albert retired in 1977, returning to his small town roots in southeastern Oklahoma. In 2000, he passed away at the age of 91. 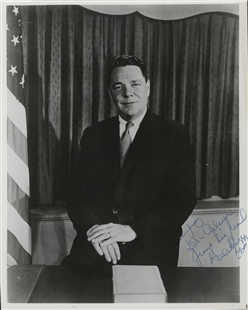 Majority Whip of the House of Representatives

Thomas Hale Boggs, Sr., was born in 1914 in Long Beach, Mississippi. Boggs put himself through law school at Tulane University selling chewing gum and mail-order suits to his fellow students. In 1934, he married Corinne (“Lindy”) Morrison Claiborne and had three children: Barbara Boggs Sigmund, Thomas Hale Boggs, Jr., and Corinne (Cokie) Boggs Roberts. In 1940, he was elected as a Representative from Louisiana to the U.S. House of Representatives where he served from 1941-1943 but unsuccessfully ran for re-election in 1942. He was again elected to the House as a Democrat in 1946 and served for thirteen subsequent Congresses.

During the 89th Congress, Boggs served as majority whip and enjoyed a close relationship with President Lyndon B. Johnson. Boggs was essential to getting Great Society legislation passed, and while his role was not in drafting bills, he defended legislation on the House floor and in the media and secured votes to ensure passage. Boggs easily influenced votes through speeches and his masterful use of television. He was known for his ability to absorb the details of legislation and to deliver concise and coherent presentations.

Although Boggs had not supported the 1964 Civil Rights Act, to the dissatisfaction of several of his colleagues and black supporters in his home district, he agreed to vote for the 1965 Voting Rights Act. His children urged him to give a speech on the topic, but he was resolved to only cast a vote. After a fellow representative from Louisiana took to the House floor to call the bill unnecessary, however, Boggs decided to respond. He spoke on the floor of the House saying, “I shall support this bill, drastic though it may be because I believe the fundamental right to vote must be part of this great experiment in human progress, under freedom, which is America.”1 His colleagues, the media, and constituents commended Boggs for a courageous speech.

In 1971, Boggs became majority leader, but the end of Boggs’ career was sudden. In October 1972, Boggs was in Alaska campaigning for a freshman congressman. On a flight from Anchorage to Juneau, Boggs’ plane disappeared, and he and three others were presumed dead. 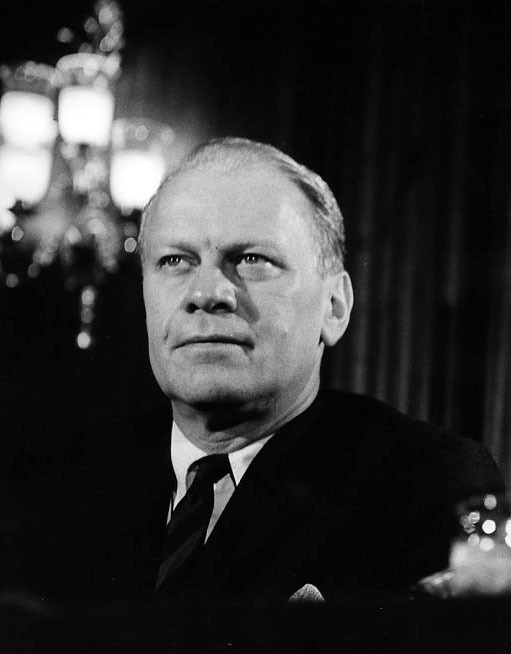 Minority Leader of the House of Representatives

On the opening day of the first session of the 89th Congress, Gerald R. “Jerry” Ford, Jr.’s Republican colleagues elected him Minority Leader of the United States House of Representatives over the incumbent, Charles Halleck (R-IN).

Ford saw the House Minority Leader position as a significant step toward his ultimate goal of becoming Speaker of the House.  Though he was not responsible for any one piece of signature legislation, Ford had diligently represented Michigan’s 5th congressional district since 1949, cultivating relationships with members of both parties and earning a reputation as an expert mediator and conciliator.

These skills were put to the test in the 89th Congress, as House Republicans were outnumbered almost two-to-one by their Democratic colleagues.  To prepare for the impending onslaught of legislation promised by President Johnson, Ford created a new Republican Planning and Research Committee to help develop policy proposals that could be offered as alternatives to the Democrat’s initiatives.

Ford later explained: “When we got to the amendment phase, we would offer our program as a substitute to the Johnson proposal.  If we lost in the Committee of the Whole, then we would usually offer it as a motion to recommit and get a vote on that.  And if we lost on the motion to recommit, our Republican Members had a choice:  They could vote against the Johnson program and say we did our best to come up with a better alternative.  Or they could vote for it and make the same argument.”

Through Ford’s plan, House Republicans successfully secured some changes to the spate of Democratic legislation passed in 1965 and 1966 and established themselves as an active minority, unwilling to simply rubber-stamp President Johnson’s Great Society initiatives. 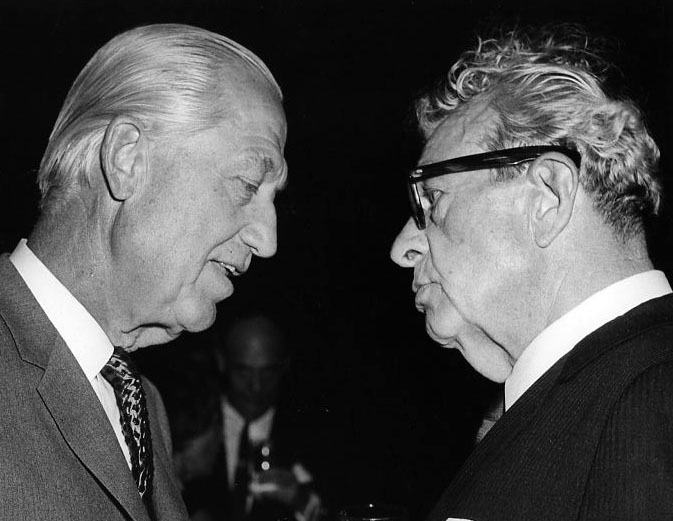 Republican Whip of the House of Representatives

Leslie C. “Les” Arends (R-IL) entered the House of Representatives in 1935 as the only Republican to unseat a Democrat in the 1934 mid-term elections.  A staunch conservative from a predominately rural district and an outspoken critic of President Franklin Roosevelt’s New Deal programs, Arends was elected Republican Whip in 1943.  He held the position for the ensuing forty-one years, longer than any member in the history of the House of Representatives.

As one of the leading conservatives in Congress, Arends was instrumental in the formation of the conservative coalition, the informal voting block of Southern Democrats and Republicans that exerted tremendous influence over America’s domestic policy during the mid-twentieth century.   In 1964, he supported the selection of Barry Goldwater as the Republican candidate for President.

After surviving a challenge from Representative Peter Frelingheusen (R-NJ) for the Whip position in 1965, Arends worked closely with Republican Minority Leader Gerald Ford during the 89th Congress to craft strategies for influencing and amending the Democratic legislation then moving through the House.  Arends was a supporter of civil rights legislation, and he did vote for the Voting Rights Act of 1965.  He also supported the Vietnam War.  However, Arends’ conservative roots ensured a philosophical opposition to most Great Society legislation, which he thought would lead to a “federalized socialistic state.”  Instead, Arends advocated that “a government that governs least, spends the least, and taxes the least, governs the best for the betterment of all.”1