National Foundation on the Arts and Humanities Act 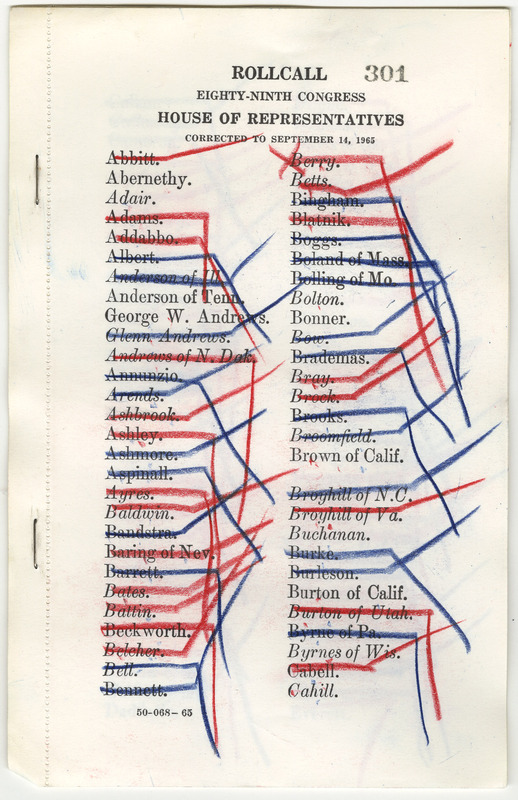 In his State of the Union address, President Lyndon B. Johnson called for a National Foundation on the Arts to “ help promote and honor creative achievements,” but he did not mention a similar foundation for the humanities.

Senator Claiborne Pell (D-RI) introduced an administration bill, S. 1483, that was referred to the Senate Labor and Public Welfare Committee and collaborated with Representative William S. Moorhead (D-PA) to sponsor bills in both chambers to create a National Foundation on the Humanities.

The administration bill and the bill to establish a national humanities foundation, S. 316, were referred to the Subcommittee on Arts and Humanities, chaired by Pell, which held a joint hearing on February 23, 1965, with the House Special Subcommittee on Labor of the Committee on Education and Labor.

As momentum grew for creating a foundation to support the humanities, Johnson sent a letter to Congress endorsing a single foundation for the related fields, the National Foundation on the Arts and Humanities, with a separate fund program, and chairman and council for each.  On June 10, the Senate passed S. 1483, providing separate endowments for the arts and the humanities on a voice vote.

In previous years, legislation providing federal support for the arts had failed in the House, but on July 14, 1965, the House Education and Labor Committee reported H.R. 9460, which was similar to the bill the Senate had approved. Supporters of the bill ran into an obstacle when the House Rules Committee failed to grant the bill a rule for floor debate. Adam Clayton Powell (D-NY), chairman of the House Education and Labor Committee, filed a resolution that by-passed the Rules Committee and made floor consideration of H.R. 9460 possible.  The resolution was adopted by the House on September 13 by a vote of 260 to 114.

Two days after the resolution passed, the House passed legislation by a voice vote providing federal support for the arts and humanities. The clearest indication of the level of support for H.R. 9460, however, came prior to the voice vote when Robert P. Griffin (R-MI) made a motion to recommit the bill.  Griffin’s motion failed on a vote of 128 to 151.  After the Senate agreed with the House passed bill, it was sent to the White House where Johnson signed The National Foundation on the Arts and Humanities Act of 1965 into law on September 29.