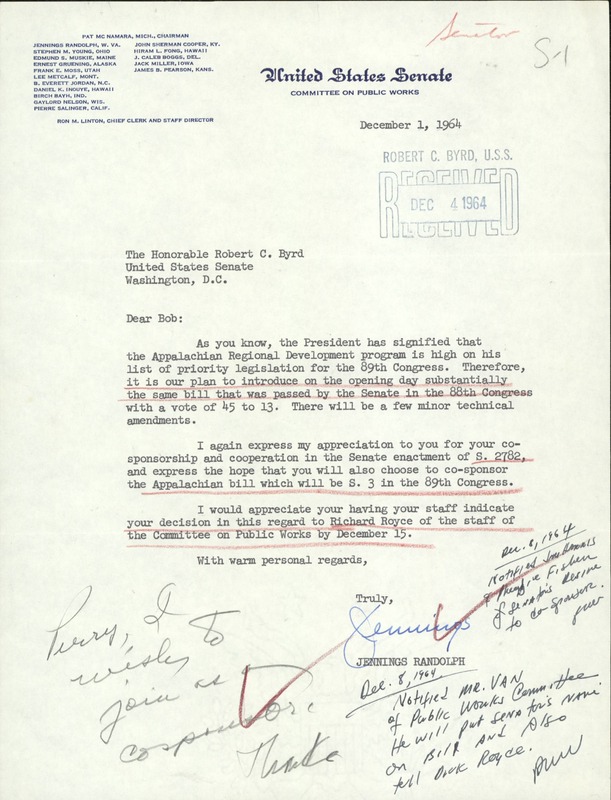 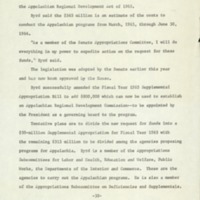 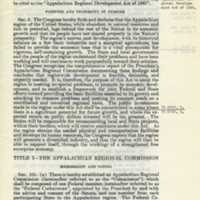 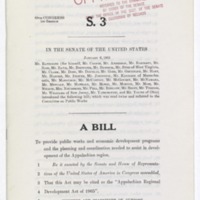 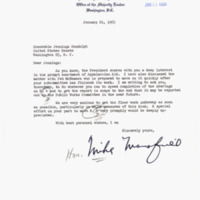 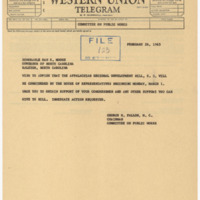 In the spring of 1964, President Lyndon B. Johnson sent a request to Congress to authorize special aid to the economically depressed Appalachian region, where one in three Americans lived in poverty. The Senate passed a bill that closely followed the president’s request, but a companion House bill failed to reach the floor prior to the adjournment of the 88th Congress. As a result, a new bill needed to be introduced and passed in the Senate when the 89th Congress convened in January 1965.

West Virginia Senator Jennings Randolph (D), chair of the Subcommittee on Public Roads of the Senate Committee on Public Works, wrote his in-state colleague, Senator Robert C. Byrd, requesting support for a bill that would provide aid to the Appalachian region. Senator Byrd, himself a product of Southern West Virginia’s coalfields, readily agreed to sign on as a co-sponsor.  On January 6, 1965, Senator Randolph introduced an administration-backed Appalachian aid bill, S. 3, calling for more than $1 billion in federal economic assistance to the region.

On January 21, 1965, Senate Majority Leader Mike Mansfield (D-MT) wrote Senator Randolph urging him to make “a special effort” to complete the subcommittee hearings and report S. 3 to the full committee chaired by Senator Pat McNamara (D-MI).  Both Senators Randolph and McNamara heeded Mansfield’s request to help him “get the floor work underway as soon as possible.”  The Public Works Committee reported the bill to the Senate on January 27, 1965, and on February 1, 1965, the bill passed by a 62 to 22 vote.

The bill then moved to the House of Representatives where it passed quickly.  It was reported by the House Committee on Public Works, chaired by George H. Fallon (D-MD), on February 17, 1965.  A week later Fallon sent a telegram to North Carolina Governor Dan K. Moore urging him “to take immediate action” to line up congressional support for the bill.  Similar telegrams were sent to all the other Appalachian state governors. S. 3 passed the House on a 257 to 165 roll call vote on March 3 and was the first significant Great Society legislation to pass the 89th Congress.

Following the passage of the Appalachian Regional Development Act in the House, Senator Byrd issued a press release announcing his intent to “expedite action” on the release of the funds needed to support the programs.  As a member of the Senate Appropriations Committee, Byrd was in a unique position to facilitate the allocation of the $365 million proposed for funding the initial programs outlined in the Act.