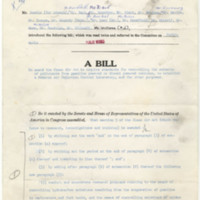 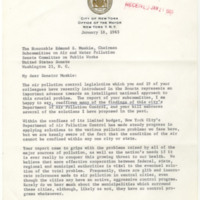 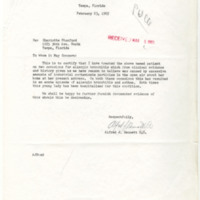 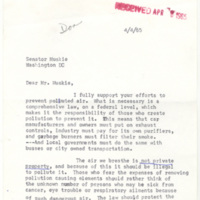 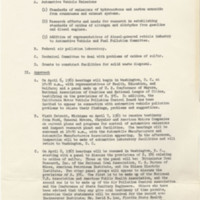 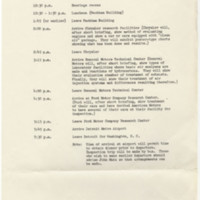 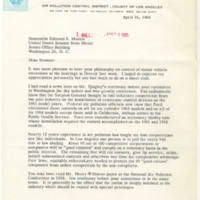 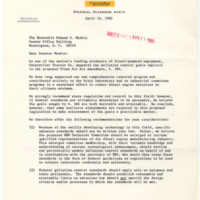 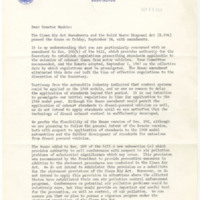 On January 7, 1965, Senator Edmund S. Muskie (D-ME), chair of the Special Air and Water Pollution Subcommittee of the Senate Public Works Committee, introduced S. 306 with 20 cosponsors.  The bill was based on findings of a 1964 report of Muskie’s subcommittee, “Steps Toward Cleaner Air.”  S. 306 called for the establishment of minimum national standards limiting exhaust emissions of air pollutants from gasoline-powered motor vehicles.  S. 306 also authorized grants to municipalities for construction of solid waste disposal facilities.

Shortly after introducing S. 306, Robert F. Wagner, Mayor of New York, wrote Senator Muskie to express his support for S. 306.  The mayor noted that New York City’s efforts to improve air quality were frequently undercut by surrounding municipalities that “have no control programs whatsoever.”  Wagner commended Muskie’s national approach to combating air pollution since “the condition of the air cannot be confined within any one city or state.”

Since World War II, air pollution had greatly increased, causing ill health to people and considerable property damage.  The committee received letters such as this one from a Tampa, Florida physician who had treated a “young lady” who had been hospitalized twice for “an acute episode of allergic bronchitis and asthma.”  The physician believed that “excessive amounts of industrial contaminate particles in the open air about her home” were responsible.

Senator Muskie received support from clean-air advocates who backed tough, national air quality standards. This supporter of S. 306 wrote that “The air we breathe is not private property, and because of this it should be illegal to pollute it.”

A later briefing paper for subcommittee members and staff outlined the major parts of S. 306 that would receive attention during the hearings to be held in Washington D.C. and Detroit, Michigan.  The briefing paper outlined the subcommittee work plan and indicated the array of interest groups that appeared before the panel as it gathered information related to the administration of S. 306, its technical requirements, and the health challenges of air pollution.

The subcommittee’s 1964 report declared that the technological skills and equipment to reduce air pollution had “passed the research stage” and that there was “no valid reason to delay” adoption of emissions control equipment in newly manufactured automobiles. As this Schedule of Events for April 7, 1965 indicates, the subcommittee traveled to Detroit to hear from automobile manufacturers and to visit Chrysler, General Motors, and Ford research facilities.

On the first day of the subcommittee hearings, the Assistant Secretary of Health, Education, and Welfare (HEW), James M. Quigley, made comments that seemed to place the administration at odds with Muskie and S. 306.  Quigley declared that the proposed controls were premature, that current federal authority was adequate, and that “we do not recommend enactment of regulatory legislation at this time….”  In a letter, S. Smith Griswold, a California Air Pollution Control Officer, expressed his alarm over Quigley’s remarks and urged Muskie to push ahead with strong regulation.  Quigley returned to the subcommittee hearings to clarify that he was only objecting to S. 306’s detailed standards and aggressive timeline to implement emission controls.

Later R. C. Brown, the Director of Research at Caterpillar Tractor Company in Peoria, Illinois, indicated in a letter that the air quality control provisions of S. 306 affected an array of economic interests.  As the nation’s leading producer of diesel-powered equipment, Caterpillar favored state regulation over national, opposed specific emission standards written into law, and wanted a more lenient timeline for implementation.

On May 18, 1965, the Senate passed S. 306 by a voice vote without debate.  On September 24, the House passed an amended S. 306 by a vote of 294 to 4.  On September 29, Acting Secretary of HEW, Wilbur Cohen, wrote Muskie of the administration’s preference for the House-passed bill that provided the Secretary of HEW more flexibility in establishing standards regulating automobile emissions and on the timeline for implementation.  Cohen assured Muskie of the administration’s plans “to pursue a vigorous program under the abatement provisions of the Clean Air Act.”  On October 1, the Senate concurred in the House amendments to S. 306 by a voice vote and on October 20, President Johnson signed the bill into law.