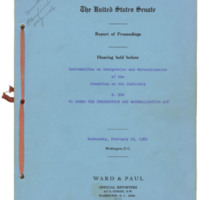 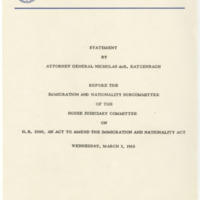 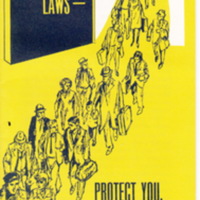 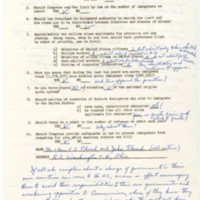 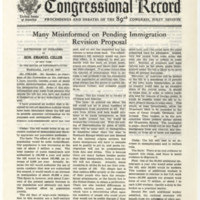 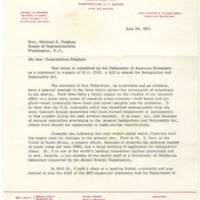 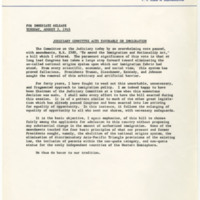 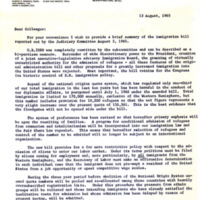 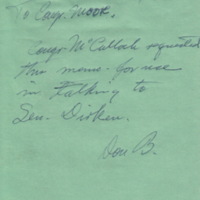 On January 4, 1965, President Lyndon B. Johnson called on Congress to eliminate the nation’s forty-year-old national origins quota system as the basis for immigration and pass an immigration law “based on the work a man can do and not where he was born or how he spells his name.”

Senator Philip A. Hart (D-MI) introduced administration-backed bill S. 500, and on February 10, the Subcommittee on Immigration and Naturalization of the Committee on the Judiciary began hearings on the bill.  In the opening statement of those hearings, Senator Edward M. Kennedy (D-MA) whose brother, President John F. Kennedy, had backed similar legislation, spoke passionately of the need for an immigration policy based on “the principle of equality and fair play for the people of all nations.”

Representative Emanuel Celler (D-NY) introduced an administration-backed immigration bill, H.R. 2580, in the House of Representatives on January 13, 1965.  On March 3, the Subcommittee on Immigration and Nationality, chaired by Representative Michael A. Feighan (D-OH), opened hearings with remarks of Attorney General Nicholas deB. Katzenbach.

He stated that a “prompt remedy” to the current immigration system was necessary for three reasons.  “Elemental humanity” required eliminating a system separating families.  “Domestic self-interest” required removing barriers that prevented “brilliant and skilled residents of other countries” from working in the United States.  Finally, “self-interest abroad” required ending immigration restrictions that discriminated against countries in Southern and Eastern Europe and Asia.

Representative Feighan did not initially endorse H.R.2580 and was close to organizations, such as the American Legion and the American Coalition of Patriotic Societies, that resisted immigration reform. Feighan opposed several provisions of H.R. 2580 and on February 20, 1965, prior to holding subcommittee hearings, he held a public hearing in his district that included parts of Cleveland, Ohio, and surrounding suburbs where support for immigration reform was low.

Chairman Cellar and Feighan had publicly feuded over immigration reform and on June 1, the Ohio representative introduced his own immigration bill.Celler, the dean of the House in the 89th Congress, was the only member who was in Congress in 1924 when the Immigration Quota Act passed. He voted against it and had been an ardent foe of national immigration quotas for forty years. On April 28, 1965, Celler printed remarks in the Congressional Record at his expense to build public support for his immigration bill.

The House Judiciary Committee and the Immigration and Naturalization Subcommittee received much correspondence from individuals and groups explaining how national immigration quotas adversely affected them.

The administration had to make concessions to Representative Feighan to get his support for the Celler bill. The House Judiciary Committee’s August 3, 1965, vote of 27 to 4 to report an amended H.R. 2580 to the House was the major milestone for congressional passage of immigration reform. House Judiciary Committee minority member Arch A. Moore Jr. (R-WV) summarized the immigration bill reported out by the committee in a dear colleague letter, writing that “H.R. 2580 was completely rewritten by the subcommittee and can be described as a bi-partisan measure.”

On August 25, the House passed H.R. 2580 by a vote of 318 to 95. After some continued discussion of amendments, the Senate passed the bill on September 22 by a voice vote. President Johnson signed the Immigration and Nationality Act into law on October 3, 1965.