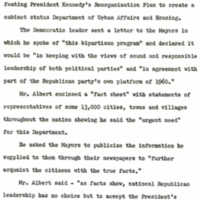 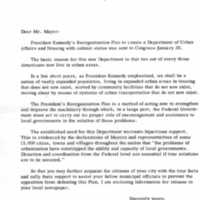 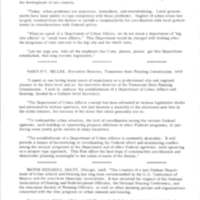 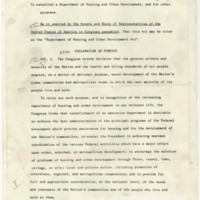 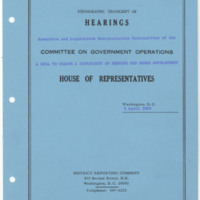 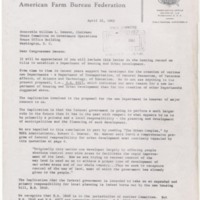 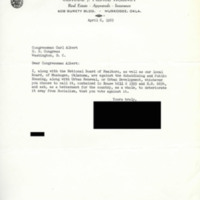 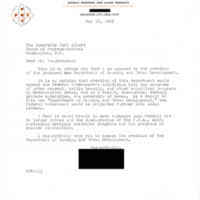 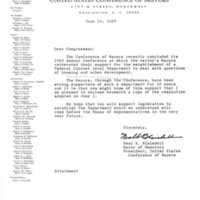 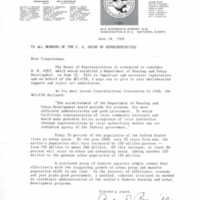 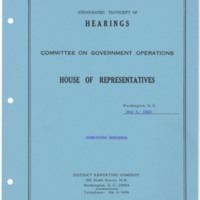 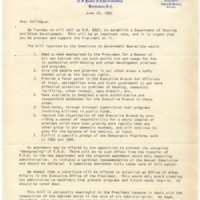 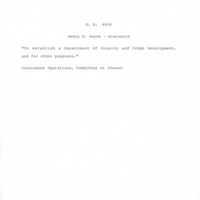 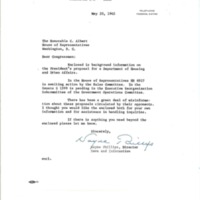 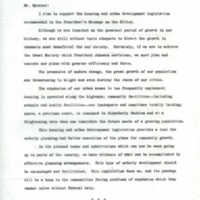 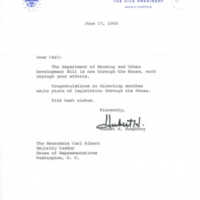 Between 1961 and 1964, Presidents John F. Kennedy and Lyndon B. Johnson annually proposed that Congress pass legislation creating a cabinet-level housing department.   On March 28, 1965, an administration- backed bill creating a Department of Housing and Urban Development was introduced by Senator Abraham A. Ribicoff (D-CT).  The bill was referred to the Senate Committee on Government Operations and the Subcommittee on Executive Reorganization began hearings on March 31.

In the House of Representatives, Representative Dante B. Fascell (D-FL) introduced H.R. 6927 that created a Department of Housing and Urban Development.  Representative William L. Dawson (D-IL), chair of the House Committee on Government Operations, enlisted the support of Richard J. Daley, the powerful mayor of Chicago and a former president of the United States Conference of Mayors.  During hearings before the Executive and Legislative Reorganization Subcommittee of the House Committee on Government Operations on April 5, 1965, Mayor Daley underscored the need for the new department by forcefully declaring that the nation needs to “recognize the obvious—that we live in an urban society…”

While there was strong support for a new department from city residents, urban political leaders, and housing advocacy organizations, rural America was less receptive.  John C. Lynn, Legislative Director of the American Farm Bureau Federation to Chairman Dawson questioned the need for the department and voiced a “major concern” that the federal government “is going to perform a much larger role” in planning and financing urban development.  The Farm Bureau was alarmed by Robert C. Weaver, Administrator of the Housing and Home Finance Agency (HFFA), who had called for “a comprehensive program of federal responsibility” concerning urban development.  Later in the year, Weaver became the first secretary of the new department and the first African-American to hold a cabinet-level position.

Chairman Dawson convened an executive session of the full committee on May 5, 1965 to vote on H.R. 6927 and report the bill to the House.  He stated that the legislation simply upgraded the existing HHFA to cabinet-level status and gave the new secretary the power to coordinate and administer urban programs.  Representative William S. Moorhead (D-PA), however, voiced concerned that the bill “is creating a skeleton” that will grow and seek new powers.  Though when the roll call vote was taken, Moorhead and 20 others voted to report the bill favorably while 8 voted against reporting the bill.

On June 14, 1965, the House Democratic leadership rallied the majority to “support the President” and to fulfill “a specific pledge of the Democratic Platforms both in 1960 and 1964” by voting for H.R. 6927.  They warned that the bill’s opponents’ claims that the transfer of the Federal Housing Administration (FHA) was a “downgrading” of that agency were bogus and that failure to transfer the agency would “hamstring” the new department.  When Representative John N. Erlenborn (R-IL) offered an amendment deleting the transfer of FHA to the department, it was easily defeated.  On June 16, the House passed the bill by a vote of 217 to 184 and on August 11, the Senate passed H.R. 6927 by a vote of 57 to 33.  When President Johnson signed the bill into law on September 9, the Department of Housing and Urban Development became the first cabinet-level department established since the Department of Health, Education and Welfare was created in 1953.