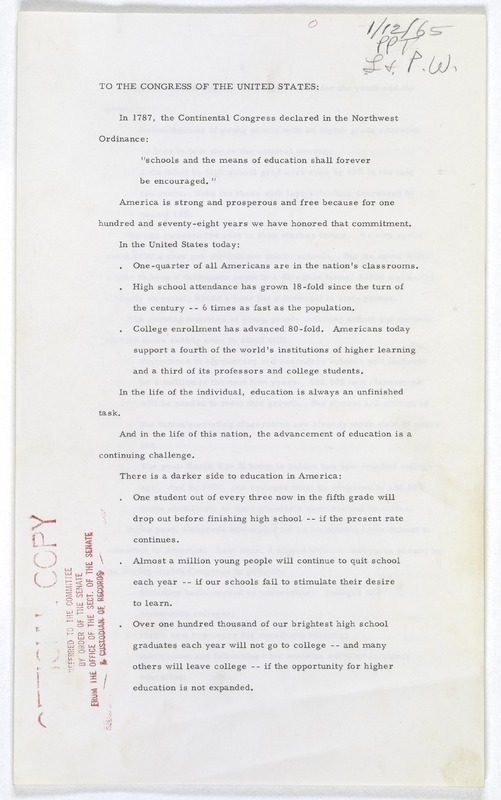 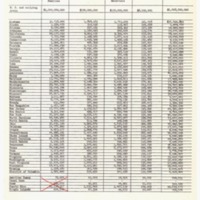 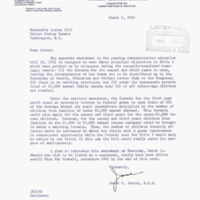 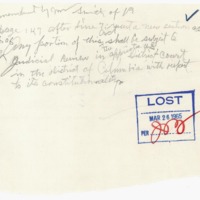 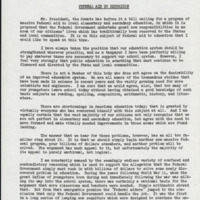 On January 12, 1965, President Lyndon B. Johnson sent Congress a forceful education message proposing “that we declare a national goal of Full Educational Opportunity.”  Further, he asserted, “Every child must be encouraged to get as much education as he has the ability to take.” President Johnson’s message tried to side-step opposition to funding private, parochial schools by basing federal support on the number of children from low-income families. To blunt fear of federal government involvement in local schools, the administration called for funds to be distributed as grants to states and provided that local districts have wide discretion on the use of funds.

Carl D. Perkins (D-KY), chair of the General Education Subcommittee of the House Committee on Education and Labor, introduced H.R. 2362, an administration-backed education bill.  It specified a federal funding formula based on half of a state’s expenditure per pupil times the number of children from families with an annual income below $2,000. The subcommittee reported the bill with the funding mechanism intact, and the full committee, despite much criticism of the funding formula, retained it when it voted 23 to 8 to report the bill on March 2, 1965.

H.R. 2362 was backed by a fragile coalition of leading education organizations and religious leaders.  The bill provided enough support to private schools to enlist the support of Catholic groups, but not so much as to arouse opposition from Protestant and Jewish groups and public teachers’ organizations. While Catholics supported the bill, they threatened opposition if it included a provision specifically permitting a constitutional challenge grounded in opposition to state support of religion.  When the bill was debated on the House floor, Representative Howard W. Smith (D-VA), an opponent of the bill, offered a hand-written amendment aimed at alienating Catholic support, but the amendment failed by a voice vote.  On March 26, 1965, by a 263 to 153 roll-call vote, the House passed H.R. 2362 and sent it to the Senate.

Senate Democratic leaders were determined to pass the bill, S. 370, without amendments in order to avoid either House reconsideration or a conference committee. The Labor and Public Welfare Committee reported the bill unanimously and without amendments to the Senate floor. The bill received some opposition: more than ten amendments were proposed, including one from Senator Jacob K. Javits (R-NY) that changed the funding formula. Senator John Williams (R-DE), spoke out against the bill, stating that "it contains within it the seeds of the first Federal education system," which would make states administrative offices of the federal government and bring with it "the flood of Federal control."

All proposed amendments to the bill were defeated, and the Senate passed the bill by a vote of 73 to 18. Two days later President Johnson signed the Elementary and Secondary Education Act into law.