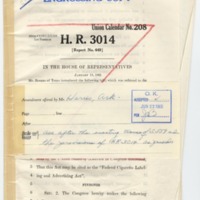 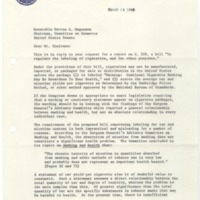 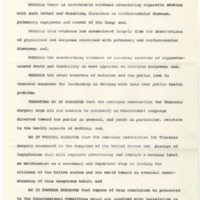 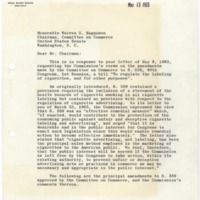 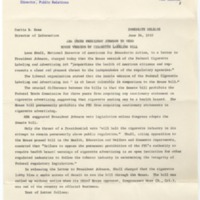 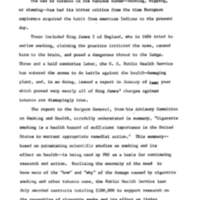 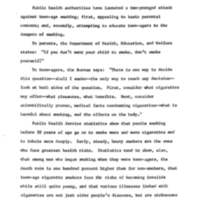 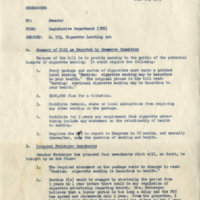 On January 11, 1964, the U.S. Surgeon General issued a detailed report concluding that cigarette smoking was a health hazard warranting “appropriate remedial action.” In June 1964, the Federal Trade Commission (FTC) announced that beginning January 1, 1965, the tobacco industry would be required to place health warning labels on their cigarette packages and that beginning July 1, 1965, similar health warnings would be required in their advertisements. The tobacco industry fought back with an aggressive lobbying effort on Capitol Hill and a public relations campaign that included brochures such as "Tobacco—a vital U.S. Industry," stressing the economic importance of the industry and its contributions to federal revenues.

On January 15, 1965, Senator Warren G. Magnuson (D-WA), chair of the Senate Committee on Commerce, introduced S. 559 requiring cigarette packages to bear a conspicuous statement: “Warning: Continual Cigarette Smoking May be Hazardous to Your Health.” S. 559 also removed a threat to tobacco interests by prohibiting any other health warning by federal, state, or local entities and effectively pre-empting the Federal Trade Commission regulation of tobacco labeling or advertising.

In the House, Representative Walter Rogers (D-TX) introduced H.R. 3014, a bill that was similar to S. 559. That bill was referred to the House Interstate and Foreign Commerce Committee and was reported to the House on June 28 by a committee vote of 23 to 8. After a floor motion by Representative Donald Rumsfeld (R-IL) to recommit the bill was defeated, the House approved H.R. 3014 by a voice vote on July 22. The bill was similar to S. 559, but instead of a three-year moratorium on federal agency regulation of labeling and advertising, the House bill permanently banned the Federal Trade Commission or other federal agency action concerning health warnings.

Both House and Senate were under pressure from health organizations, which sought stronger legislation informing the public about the health hazards of cigarette smoking, and tobacco interests, which wanted to limit the impact of the proposed health warning label. House passage of H.R. 3014 provoked strong opposition from health organizations and liberal advocacy groups. Americans for Democratic Action issued a press release stating that the Senate-passed bill “is at least tolerable,” but urged President Johnson to veto the legislation if the House version permanently barring the Federal Trade Commission (FTC) action on health warning in advertising remained in the bill.

In May 1965, the Federal Trade Commission (FTC) Chairman Paul Rand Dixon wrote Senator Warren G. Magnuson to restate the position of the agency that warnings in cigarette advertising, not just labels on packages, would more fully inform the public of the hazards of cigarette smoking and to re-assert that the public interest would be served “if the Commission is left free by the Congress to take action…” While Dixon continued to resist Congress’s pre-emption of FTC regulatory action, he supported amendments to S. 559 providing for a three-year moratorium on FTC regulation while more information about “the health consequences of smoking” was obtained.