Shortly after the 1996 presidential election, University of Kansas (KU) Chancellor Robert Hemenway approached Senator Dole with a proposal that he entrust his congressional papers, accrued over 35 years of public service, to KU — the university he attended before military service in WWII interrupted his studies. The University was eager to build upon the research potential of this collection and create an institute that would offer opportunities for the public and for students of all ages and all backgrounds — from KU and across the nation — to discover how they might best serve their communities, their states, and the nation. Senator Dole immediately agreed, but insisted that he wanted no personal monument. Rather, he favored creation of a non-partisan forum, dedicated to public service, training for leadership, and promoting the ideal that politics is an honorable profession. It was from these discussions that the Robert J. Dole Institute of Politics was conceived. Dole deposited his papers with the University of Kansas in May 2000 and transferred title to the university in 2001. The papers were housed at the Spencer Research Library until the Dole Institute was completed in 2003, at which point they were transferred to the newly constructed building, and the Robert J. Dole Archive and Special Collections was born. 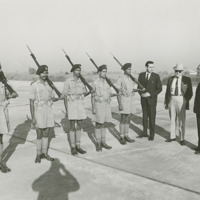 Members of the Congressional Delegation at Purnea Airport where they inspected the Bihar State Armed Constabulary guard of honor. 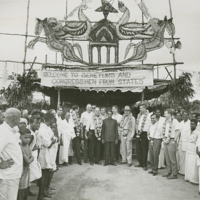 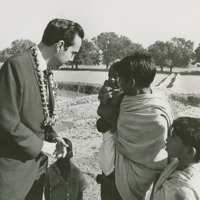 Children crowding around Congressman Robert J. Dole were given pieces of candy by the friendly Kansas legislator. 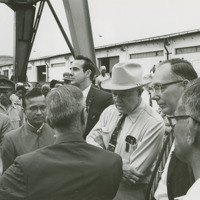 Members of the Congressional Delegation during a briefing at the Port of Madras, one of the principal unloading points for grain and fertilizer shipments from the United States.

Photograph of the Congressional Delegation visiting a Fair Price Shop 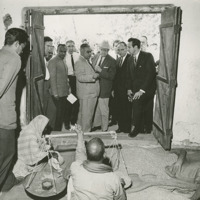 The U.S. Congressional Delegation led by Representative William R. Poage of Texas (center with hat) visit a fair price shop in a village just outside the town of Gaya in the drought-stricken Bihar state and see the distribution of American wheat and… 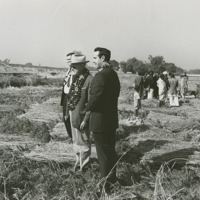 Congressmen Poage and Dole wearing garlands just presented to them by local villagers in Purnea district, Bihar State. They are shown in a paddy field on newly irrigated land.

Photograph of the Congressional Delegation touring an Indian village 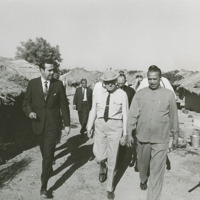 Members of the U.S. Congressional Delegation touring a typical village in the drought struck areas of Bihar. 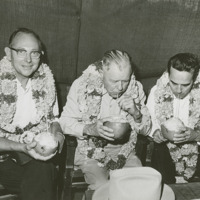 Senator Miller, Congressman Poage and Congressman Dole enjoy a drink of fresh coconut milk during a meeting with rice farmers in Tanore District, Madras State. The Congressmen are wearing garlands of roses presented to them by local farmers. 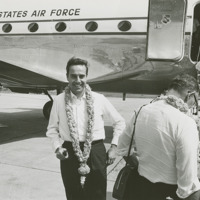 Congressman Robert J. Dole at Tiruchi Airport wearing a garland of roses presented to him by local farmers who came to the airport to meet him and his colleagues.

Photograph of the Congressional Delegation inside a tent wearing garlands 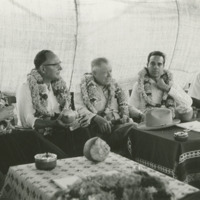 The Congressional Delegation sits inside a tent wearing garlands